Do you own a prized classic or vintage car?

Worn your tyres down and terrified to take it to a local garage? Or perhaps your tyres are perished and cracking?

Relax, you've found people who care and take pride in their work!

Our technicians take the utmost of care when changing tyres, balancing or fixing punctures as they know how much they mean to you, the owner.

Whether it be a Mercedes-Benz, Mustang or an MGB, we have handled a vast array of vintage and classic vehicles (apart from the Peel P50, we are yet to do one of those!) Quite often, these vehicles are in concourse condition, so we take necessary precautions and extra care to ensure everything remains in pristine condition. What's more, we're equipped with adaptors for our electronic wheel balancers to allow for a huge range of wheel variants.

We've handled everything from Mazda to McLaren and Buick to Bugatti, we deal with cars from across the pond and on our porch - often working on vehicles with extremely high monetary and emotional values. Quite often, these vehicles are in concourse condition too. What's more, we're equipped with adaptors for our electronic wheel balancers to allow for a huge range of wheel variants.

What defines a classic car?

The definition can vary from one person to another but, the general rule of thumb is; if the car is over 25 years old, it's then deemed a classic car. There are a few questionable classics out there - but beauty, as they say, is in the eye of the beholder and an emotional classic is just as important!

Under the classic car name, there are a number of sub categories;

Veteran: Cars/motorwagans built before the outbreak of WW1

One of the biggest factors that helps indicate a classic car is its value. If the value starts to creep up, then it's a good indication that it has turned into a classic car. But, there is more than one factor. Brand history, racing pedigree, units produced, and public appeal all contribute in defining and cementing a car into the history books.

Another factor that can be applied to any car whether it be vintage, modern or classic is the number of units produced vs the number remaining. For example, the Maserati 3200 only had 170 units produced and became an instant 'modern classic' from the factory. In contrast, although the Austin Alegro was not a classic from the factory and had a massive 642,350 units built, only 195 are left on the road. That's a reduction of 99.97%!

Nowadays, tyres contain a cocktail of different chemicals ranging from pure tree rubber through to antioxidants and carbon black. But what's the history behind the whitewall?

During the early mass production period of cars for the general public just after the war, tyres were made from pure rubber mixed with a couple of chemicals and, most importantly, zinc oxide. A by-product of using the oxide was that the tyre became completely white. However, the pure white tyre didn't last long and deteriorated quickly. To combat this, an entirely black tyre was created by mixing the rubber with black carbon. This dramatically increased the life of the tyre but, removed the unique white exterior. Most manufactures at the time still created the white tyre (to save money) but installed a layer of black rubber around the outside to increase the life whist retaining the relatively low cost. If someone had curbed one of these tyres or rubbed through the side wall, the white rubber underneath would show through. 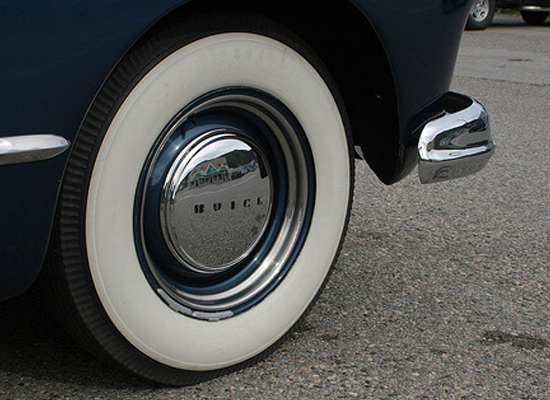 In 1934, Ford introduced a whitewall option to all its new cars with the eye-watering price tag of $11.25 (converted to £165 to account for inflation and price change). But, it was largely recognised that because the black tyre was more exclusive and cost more, it was held back for the premium car manufactures of the day.

With the evolution of cheaper equipment, ingredients and overall lower costs per unit, the white wall became more expensive to produce compared to the black wall product.

If you're looking for a white wall tyre, why not give us a call? Our technicians are trained to ensure no markings are left on the pristine wall whilst being installed and we still have access to specific suppliers of vintage tyre products.

Not all mobile tyre installers have the capabilities (or knowledge) to safely and carefully install inner tubes. Our experts do!

Before ordering an inner tube, much like tyres, you need to know what you're looking for. The two main examples are straight or bent valves. As the name suggests, these valves are either straight or bent at an angle. 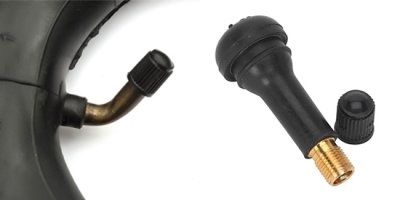 Bent valves are commonly found on classic deep-dish wheels and wheels that have larger spokes. As the valve is installed towards the centre of the wheel, a bent valve allows the user to inflate the tyre without flexing like a contortionist.

Installing the inner tube is a relatively simple task. Much like changing a bicycle tyre or repairing a puncture, we first inspect the outside of the tyre to see if there are any obvious signs of damage. After the inspection, we remove the valve core to reduce the inside pressure, break the bead on both sides of the tyre and remove one side of the tyre from the rim. This allows us to detach the inner tube from the rim and fully remove it. Installing a new inner tube is just a reverse process: Installation of the bottom bead, placement of the tube inside the tyre, partial inflation, install the top bead and finally fully inflate to pop the bead into place. After the inflation process, we fully balance the wheel and install it back onto the vehicle ready for another journey.

We don't tend to repair inner tubes as they're usually already aged and therefore not cost effective for the customer to do so.

Not all classic cars come with the trope of wire wheels. Some come with stamped steels, others with alloys. But, what's the differences?

Invented in the early 1800's by aeronautical engineer George Cayley, the wire wheel was predominantly used by bicycles and motor tricycles until it was phased into mainstream production with the creation of the motor car in around 1907.

The main advantage of the wire wheel was their weight saving. But, with many components and increased complexity from the spokes, the creation of these wheels came at a premium price.

When the premium price and weight saving feature of a wire wheel could not be justified, pressed steel wheels fell into favor. 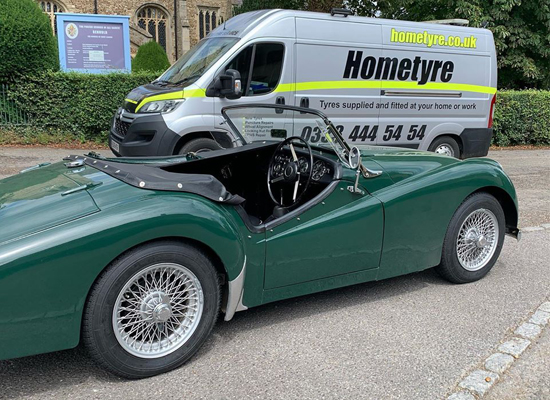 Due to complaints from motor manufactures about the easy breakability of early wood wheels on cars, Joesph Sankey of GKN and then a major metal tea tray producer, developed an alternative pressed steel wheel. Previously becoming close friends with a Mr Herbert Austin, yes that Austin, they began production of these new pressed steel wheels soon became commonplace on most British manufactures such as Daimler, Rover, Humber and then later Morris.

If your vehicle has wire wheels, we can work on the - no problem! Most wire wheels have a protective tape (rim tape) applied to the wheel internally to protect the inner tube from abrasion against the wire ends. This is often replaced during work on the tyres.

What happens if your tyre hasn't been manufactured since the early forties? Well, with our dedicated vintage tyre suppliers, there is a high chance that we might have access to that exact make and model of tyre (or something appropriately close!)

We have access to thousands of specialist tyres from brands including MICHELIN, DUNLOP and AVON including cross-ply and radial options. They're all a phone call away!

Manufacturers are now starting to pull old patterns from the depths of their archives and gearing up for a small production run of historic tyres! One of the most recent brands is Pirelli introducing the Cinturato CN54 with a size of 125R12! 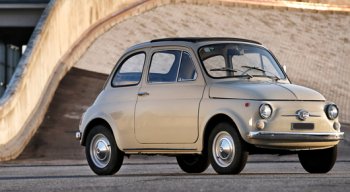 You may even be in some luck as manufactures are starting to pull old patterns from their wardrobe and gearing up for small production runs! One of the most recent brands is the Pirelli Cinturato CN54 with a size of 125R12!