Welcoming Hometyre Kent to the World!

Creating your own business from scratch can be a very scary and daunting process. Originally from Brazil, Robson moved to the UK after a promotion. During the initial stages of Covid, the business suffered and eventually he was placed onto furlough with a resulting redundancy having spent his time helping to building a strong business from the ground up, this came as quite a shock. After looking into the future, Robson found our growing brand and made the first step in getting back on the road.

After the initial enquiry, the first step was meeting the team up at our head offices in hilly Shropshire where Robson could get a feel for the company, how we operate and generally set out the business plan. Shortly after the meeting concluded, Robson elected to join the network! The next stage was to contact van suppliers and order a new van. Due to the pandemic, availability of vans has rapidly decreased to almost nothing as people kit them out for overlanding and holidaying. Finding the perfect van now takes twice as long!

With the go ahead from Robson, the foundations of the business could start to be built from the operations side. In addition, a brand-new silver Peugeot L3H2 van was sourced and built to our specification by our in-house head mechanic. Custom interior, bespoke balancing machine, bead breaker and all ancillaries/consumables were installed and loaded onto the van. Although this may sound simple, the process for kitting out a van is long and complex! Therefore, this is undertaken as soon as the go ahead is given (typically this takes three to four weeks). 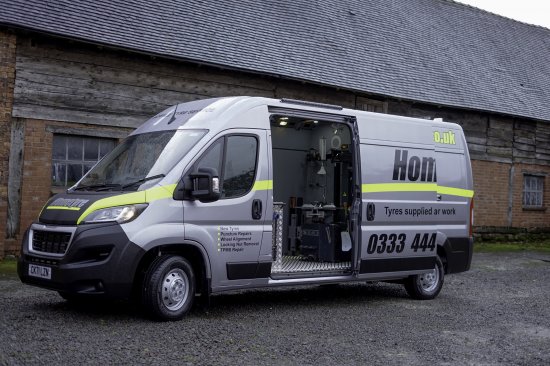 Whilst the van was being built, Robson completed his tour of the UK Hometyre franchises and headed back to the head office for an intensive two-week period of training.

This training builds on the skills learnt out in the field but also ensures that the basics are hammered in. From puncture repairs and TPMS Valve replacements to balancing and wheel alignments, these skills are honed in and perfected before being released onto the road!

Finally, after a sign off from all technicians at the head office, Robson left with a massive grin and was pumped to start helping people out on the road!