Could this be and become a common problem?

These tyres were replaced today on a customers vehicle. The car is a 2012 Mercedes CLK with 30k miles on the clock. 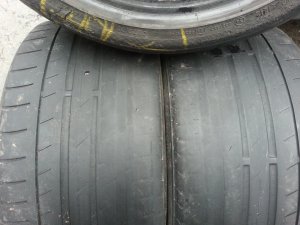 The gentleman was unsure how to check his tyres properly but recognised that some of the bulges on the front tyres were perhaps cause for concern. The problem facing many motorists now seems to give rise to this worrying trend of vehicles running on seriously worn/damaged tyres.

1. Service intervals on modern vehicles due to developments within components durability and oil technology have increased to over 30,000 miles in some instances.

2. Traction control, ESP and intelligent braking systems, coupled with vastly improved internal noise transmission mean that drivers are less aware when tyres have gone way past the usable and safe window of operation.

3. New vehicles only require an Mot after three years. These annual checks for many motorists often represent the only time in a calender year that tyres are properly inspected.

4. Wide tyres on low slung vehicles are often very difficult to properly inspect for many motorists. The nature of the suspension set up of many modern vehicles to improve cornering means that inner sections of tyres often wear away much more rapdily than the outer. 5. People are busy making a living to pays bills and often simply overlook something which can often feel fairly trivial but can be a very real killer.

Those that have had lives lost or forever altered would always wish for the chance to do it differently a second time round. This particular driver was obviously quite shocked to see the extent of the wear and damage and very relieved not to have suffered as a result - certainly given the wet of late. A series of reasons had occurred as to why these tyres were allowed to go this far.

The scare should prevent this happening again for this driver though. Folks, the message may be coming from a tyre retailer so some may just disregard this - but if this scenario sounds familiar to you or someone you know, just take a few minutes to look into it!

Wherever you get them replaced and whoever by, it's simply not worth the risk to leave them to chance!