Locknut removal on a Peugeot 308

One of the jobs booked last week was a locking wheelnut removal on a 2016 Peugeot 308.

These  have a locknut that has a spinning collar at the bottom as well as a spinning top, they can be one of the most difficult to remove especially if over tightened. The top spinning part is the bit which engages with the normal removal socket, but if someone uses an air gun on it, or tries hammering the socket in place. Then the top part slides down the shaft and doesn't work anymore.

When I arrived at the job, I asked the customer what had happened. He explained that he took his car to a large well known tyre and car parts place in Bognor to have two front tyres replaced. They changed one, then damaged the locknut on the second wheel. They tried to get if off, but then broke off the top spinning part. They then told the customer that they couldn't get it off and that they weren't insured to try.

One phone call to Hometyre, and here we are!

I first ensured all the other nuts on the wheel were tight to relieve pressure on the locknut. Then using the specialist tools in my van, I was able to remove the locknut within 5 minutes without any damage to the wheel.  Once it was off, I then loosened off the other nuts, then re-tightened them using a torque wrench to ensure they are the correct tightness for the car.

The photo below shows the locknut with the top spinning part removed.

The customer then took his car back to the tyre depot, so they could fit his second tyre.  He could have had us at hometyre fit a tyre, but unfortunately his company has an account with the place that damaged the locknut and he had to use them. 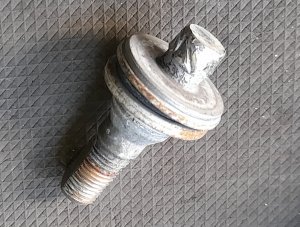