Do tyres have a shelf life?

Since the 1980s, tyres have had a date stamp added to the sidewalls so that you can see how old they are. 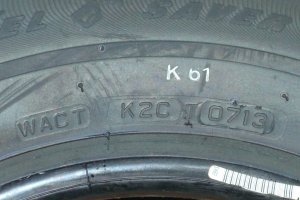 The service life of a tyre is usually measured by the amount of tread remaining; in the UK the legal limit is 1.6mm over ¾ of the tread all around the circumference. But we should also be looking at the date code as oxidisation is also a serious concern, and since tyres are made of rubber they degrade with age.

Most consumers in the UK do not know that the date code exists, a survey in 2006 showed that only 4% of drivers realised that tyres becomes more dangerous as they age. A large body of scientific evidence supports that most tyres should be replaced six years from the date they were manufactured. This six year expiration date begins from the day the tyre was made, not from the day it was sold and fitted to a vehicle.

Tyres age dangerously because a chemical process commonly referred to as oxidisation occurs. This simply means that a tyres components are exposed to oxygen. The oxygen particles cause the flexible components of the tyre to harden and become brittle. Over time, the tyre will fall apart under normal stress, just like an old rubber band. Because this process occurs naturally, it doesn't matter if a tyre is being used, stored as a spare, or waiting on a shelf in a tyre depot.... the breakdown process has started from day one.

How old is too old for a tyre?

This is a subject of much debate within the tyre industry and no tyre expert can tell exactly how long a tyre will last. The results of experience of many tyre manufacturing companies including Bridgestone, warrant their tyres for 5 years from date of manufacture. Based on these understandings many vehicle manufacturers are now advising their customers to replace their tyres after 6 years, regardless of tread depth remaining.

Regardless of its age, any tyre should be replaced if it shows significant signs of crazing, or cracking within the tread grooves or on the sidewalls, or if there is any sign of bulging on the tread face or sidewalls. All tyres should be inspected on a regular basis. Do not wait for a yearly MOT or something to fail. If in doubt about a tyres suitability, please consult your local Hometyre representative we will gladly advise you.

There are a number of organisations that are calling for an expiration date to be stamped on tyres, but until then the onus is down to you the consumer.

This is also one of the reasons that at Hometyre we strongly oppose the sale of part worn tyres. Most of these are either accident recovered tyres (where the internal structural damage is not known) puncture damaged and removed from scrap piles, and some have even been found to be 15-20 years old too have become brittle and dangerous. Without any current laws in the UK regarding age, part worn sellers can fit pretty much anything they like to your vehicle. 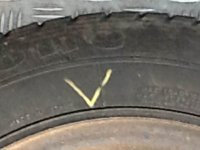 Photo shows a crack around the edge of a tyre. 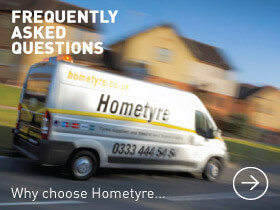 Our contactless Mobile Tyre Fitting Service is provided to all of our customers, allowing us to observe every precaution we can during our visit to you.

Wherever possible, we are offering priority bookings to frontline NHS staff and other key workers.