I was called out to a Kia Sportage with a flat tyre. The owner explained that he only had it fitted last week and it had lost pressure almost immediately. He had pumped it back up and it lasted for a few days but had gone down again. He suspected a leaking valve, and I was surprised that he didn't just go back to the place that fitted the tyre. He then explained that it was a part worn tyre, and he would preference if we at Hometyre could fix it. 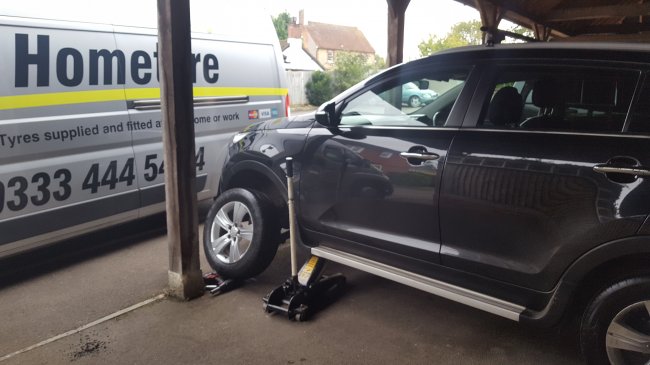 I removed the wheel from the car and took it into my van, first off I checked the valve....it was ok. I then checked all around the tyre for any signs of a puncture but couldn't find anything. Finally I used a leak detector around the rim, at which point I found a small leak on the inner edge. I deflated the tyre and removed it from the rim. when I then checked the rim there didn't appear to be a problem. I then looked in the tyre and found that it had dried up tyre sealant all round the inside. This to me showed a major problem in buying a part worn tyre, I guess there is a small hole somewhere in the tyre, but the sealant is hiding it.

All I could do was to apply a bead seal around the edge of the rim and refit the tyre, along with a new valve. There is no way of knowing if there is a small hole elsewhere in the tyre.

i explained this to the customer, who understood. He was not happy that he had been sold a tyre that may have a problem that had been hidden by a sealant.

He was going to check the tyre over the next day or so and if he found it still going down then he would take it back to the part worn dealer to get a refund.

This is one reason we at Hometyre do not recommend the use of part worn tyres, as there is no way of knowing the tyres previous life. At least with a new tyre, you know what you are getting.