DOT Codes on Tyres and How to Store Them

Used world wide, DOT Codes are used to mark the week in which the tyre has been manufactured. Found on the side-wall of the tyre, DOT codes are found in a circle with four digits. The first two of which correspond to the week in which the tyre was manufactured whilst the last two are the year. In the below image, the tyre would have been manufactured on the 22nd week of 2018. As of writing, this would be nearly two and a half years old. 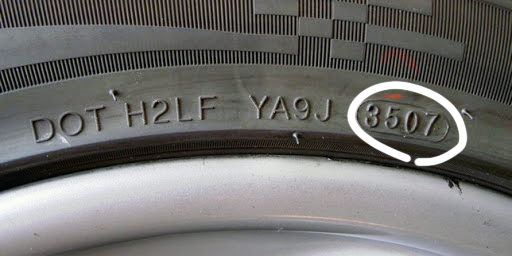 However, sometimes we come across tyres that were manufactured before the year 2000. These DOT codes are presented slightly differently. Instead of the four numbers, it will be three (but still In the circle). Again, the first two digits will be the week of manufacture whilst the last digit will be the year. For example, if the tyre said 396, it would be the 39th week of 1996 or 1986. To make things slightly clearer, manufactures installed a triangle after the code if it was manufactured in the 90’s.

The are multiple ways of storing your tyres but the best ways can be broken down into four categories: Light, Location, Temperature and Moisture.

Avoid storing in direct sunlight. In direct sunlight causes the compounds in the rubber to evaporate and can result in premature cracking of a tyre. The best solution is to store in an area with no light but, little light will be OK.

Tyres need to be stored in an up-right position and turned every so often to prevent flat spots forming on the tyre.

Kept in a room without sudden fluctuations such as an attic or insulated shed.

Tyres should be stored in a well-ventilated room with little to no moisture.

One of the most common methods to storing tyres is in an insulated garden shed covered with hemp. However, people with little space can store them outside under a tarpaulin cover to stop the light and rain.