From town to town and from city to city there is always a landmark. London has Big Ben (Elizabeth Tower), Birmingham has its canals and Edinburgh has the historic castle. Cumbria is known for its beauty, torrential rain and vast lakes. One thing it’s also known for its roads, both good and bad. Finding a stunning driving road in this area isn’t hard but finding one that; isn’t full of traffic, has potholes and isn’t also congested with sheep is a little more tricky. There is one road in particular that is often the site of our mobile service, the B5289. In keeping with the rural aesthetic, the sides of the roads are lined with small slate walls and slate edged curbs that, although look stunning, causes quite a bit of damage to a tyre when hit. Tyre sidewalls aren't designed to withstand a 'slicing' effect caused by razor sharp slate edges! 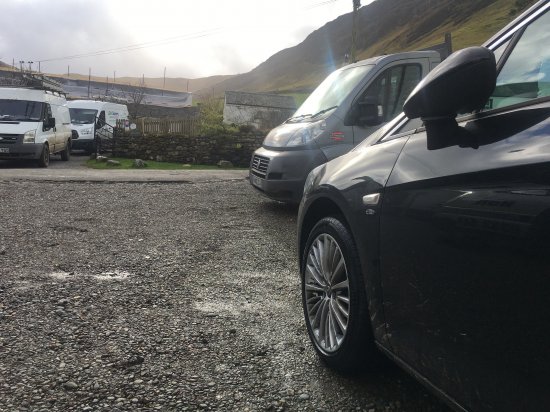 We recently attended a customer’s vehicle who had lost an argument with one of these walls. Fortunately for the customer, the happened next to a small beauty spot with a small car park. After safely moving the vehicle into one of the bays, they contacted us immediately and went through the booking process. As the size was a little unusual, we had to order one in for the next morning but as the customer was staying just down the road, it was no issue for him.

Upon arrival to the customer’s car, we inspected all four tyres to ensure that no others were damaged. In this instance, the front two tyres had plenty of tread but, the two rears were running perilously low (just below the recommended limit of 3mm) and needed to be changed sooner rather than later.

If you were looking for new set of tyres or have had an argument with a rock, don’t hesitate to give us a call on 0333 444 5454 or send an enquiry to info@hometyre.co.uk