With recent news suggesting the UK is about to experience a level of growth only seen after the second world war, it is only natural that the number of caravans on the road increases due to their popularity and appeal of exploring the UK  as well as uncertainty  regarding overseas holidays in 2021 ,from the comfort of your own mobile home.

Before heading out around the UK, whether it be a car, van or caravan, it's always best to perform a general safety check on the vehicle especially focusing on the tyres. There are two main things to note when checking the tyres on a caravan; The DOT code (age of the tyres) and if they are starting to perish in the tread. Checking the DOT codes is relatively simple as these are clearly displayed on the side of the tyre. All tyres nowadays will have four numbers in a circle (see the below image).

Generally speaking, caravans tend to do little mileage per year with the tyre changes being due to the age. Due to being static and outside for a vast majority of their life, these tyres are hit will all of mother nature's elements with the harshest being UV rays from the sun. These break down the chemical compounds in the tyre causing them to become brittle. Whilst looking new from the outside, a tyre that has been on a caravan for a number of years may be starting to perish in the tread. 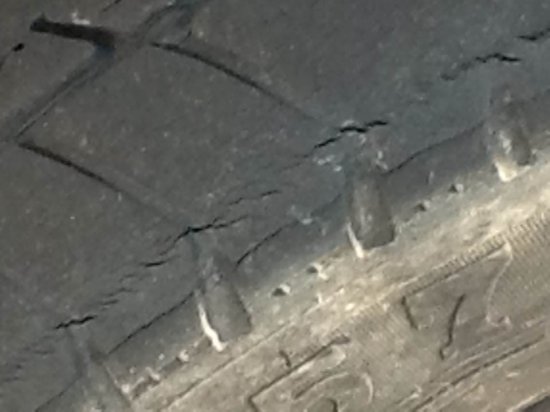 Whilst being driven on, the air in the tyre expands causing these cracks to rupture and thus a blow-out at speed happens. However, this is not the only cause of a blow-out. One of the other common factors is having a puncture. These can be picked up whilst driving without the driver know. Despite all the safety checks these can still sadly happen. One of the ways to prevent total calamity due to a blown tyre is to install Tyron Bands to the wheels. These are metal bands that are installed into the well of the wheel which prevent the bead of the tyre from coming off at speed allowing the driver to reach a safe location. You can find more about these bands here.

Alternatively, if you were looking at purchasing a set of bands, new tyres for you caravan or just need some advice, why not give us a call on 0333 444 5454 or send an enquiry to info@hometyre.co.uk!